Industrial Systems and Control (ISC) Limited, a highly regarded control engineering specialist based in Glasgow, was once again recognised for its innovative control application on 6 August 2013, in Austin, Texas during the National Instruments (NI) NIWeek conference and exhibition, attended by a global audience of over 4000.

Following its recognition in UK & Ireland in the previous year, the control system developed by ISC to operate the Turbine Access System (TAS)® was named 2013 Customer Application of the Year and also won in the Advanced Control Systems category in the NI Graphical System Design Achievement (GSDA) awards.

'... the global GSDA awards accept hundreds of submissions from all 40 of the NI branches... winning the coveted Grand Prix is no mean feat. To me, it highlights that engineering innovation is alive and well in the UK.'
- Richard Roberts, NI UK
'This award is testament to the creativeness and rigour ISC has and which allows us to develop bespoke control system solutions. Close co-operation with the engineers at Houlder, ADEX and National Instruments played an important part in making this project such a success.'
- Andy Clegg, Managing Director, ISC
'In realising the TAS, we required significant control system expertise. The system ISC delivered very accurately compensates for boat heave, pitch, and roll motions, and exceeded our expectations. The fact TAS is now available to market makes it an exciting time for us in offshore wind and our relationship with ISC continues with larger, more complex bespoke equipment for the sector.'
- Paul Shaw, Marine Equipment Director, Houlder

A lightweight, hydraulic gangway developed by Houlder and BMT Nigel Gee, the TAS enables the safe transfer of maintenance engineers between workboats and offshore wind turbines. The control system developed by ISC is central to its operation. By automatically compensating for boat roll, heave and pitch, it keeps the tip of the gangway motionless to the tower without being physically connected to it. The TAS is now in production - with a second and subsequent units planned in 2014, 15, 16 etc. 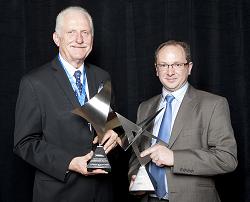